The IEEE Constitution is IEEE’s highest internal legal and governing document. It summarizes IEEE’s fundamental objectives, organization, and leadership composition to list a few of the document’s 14 sections, called Articles.

The IEEE Board of Directors or a member may amend the IEEE Constitution as outlined in the Constitution’s Article XIV – Amendments, IEEE Bylaws, and IEEE Policies.

To adopt an amendment, an affirmative vote of at least two-thirds of all ballots cast is required, provided the total number of  those voting is not less than ten percent of all IEEE's members who are eligible to vote.

During the Board’s June 2022 meeting, the Board endorsed the proposed amendment. Within days of the endorsement, the Election Oversight Committee identified two members active in the forum, who maintained opposing views of one another. One of the individuals, authored an in support statement and another individual authored an in opposition statement.

The 2022 annual election ballot will contain the two statements the authors submitted “as is”, the proposed constitutional amendment that the Board endorsed, and the 200-word summary. Below is the information:

IEEE Board of Directors' Statement

Proposal: increase the total number of voting members required from 0.333% to 1% and add a 0.333% voting member requirement for each Region.

Side By Side Comparison of Only Those Sections To Be Changed 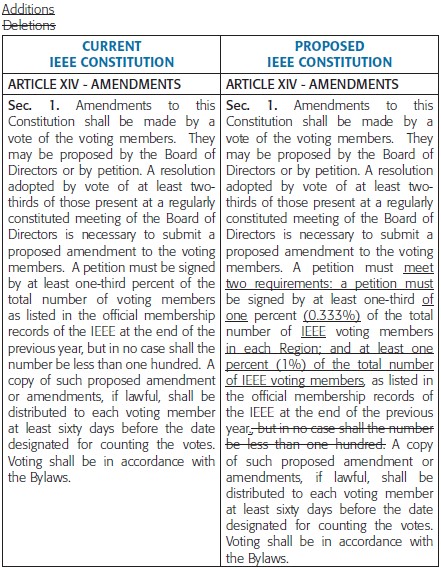 The proposed amendment reflects changes in IEEE membership and in the emergence of global electronic communications. In 1963 IEEE had 150,000 members, 93% of which were in today’s Regions 1-6 in the U.S., and electronic communications were almost non-existent. Today IEEE has over 400,000 members, with approximately 1/3 in Regions 1-6, 1/3 in Region 10, and 1/3 in Regions 7, 8, and 9, and global, personal electronic communication is instant and ubiquitous. Given the evolution of global membership distribution and the enablement of electronic communications and IEEE electronic petitions, IEEE is today able to ensure equity across all Regions and encourage deeper membership engagement through the requirement that every Region have a voice in proposed constitutional changes, without the great burden of collecting paper signatures. The proposed amendment ensures that future proposed constitutional changes reflect global member interests in a global organization, encourages professional collaboration across regional boundaries, and results in a more balanced, equitable, and scalable IEEE that will keep pace with change, both in global membership and relevant technologies, and continue to support the careers and technical lives of our members.

The IEEE Board of Directors (BoD) is correct to assert that “IEEE’s Constitution is IEEE’s highest-level governance document that affects all Members and rarely should change.” As such, no change should be made unless substantial evidence is provided that the Constitution has a critical flaw that needs fixed. Such evidence was not provided, and so the proposed amendment should be rejected.

No evidence was provided that the current Constitution is resulting in a large number of member-initiated petitions. If such petitions are currently rare, then the proposed amendment to make the requirements much more onerous will make it impossible for a member to bring an amendment to the ballot.

The proposed amendment will require collecting over 3000 signatures, which is nearly impossible given the time required to locate, contact, communicate with, and discuss with so many members. The proposed 0.333% requirement per region will make member-initiated petitions impossible, given the broad geographical locations and the wide variety of languages spanned in the countries covered in the regions. To place an amendment on the ballot would require such an extensive investment in time and finances that only the very rich would have a chance of bringing an amendment to the ballot.

About IEEE Board of Directors Proposed Constitutional Amendment

Proposing Amendment to the Voting Members

A resolution adopted by vote of at least two-thirds of those present at a regularly constituted meeting of the Board of Directors is necessary to submit a proposed amendment to the voting members. A copy of such proposed amendment(s), shall be distributed to each voting member at least sixty days prior to the date designated for counting the votes.

Endorsing Amendment on the Election Ballot

When the Board of Directors undertakes an action to place a referendum on the ballot, that shall not be construed as endorsement. The Board of Directors may take a non-binding informational poll to provide context to the member discussion, with the understanding that the non-binding Board position is subject to change during the discussion process.

Constitutional Amendments may be placed on the annual election ballot by the IEEE Board of Directors or by member petition.

A petition must be signed by at least one-third percent of the total number of voting members as listed in the official membership records of the IEEE at the end of the previous year, but in no case shall the number be less than 100.

A proposed Constitutional Amendment shall not conflict with IEEE’s Certificate of Incorporation, the New York Not-For-Profit Corporation Law, or other legal or regulatory authority applicable to IEEE. Before an amendment to the Constitution is submitted to the voting members, it shall be reviewed by IEEE Legal Counsel for compliance.

The initiators of a Constitutional Amendment, and at their option and expense, their own legal counsel, shall work with IEEE Legal Counsel and the IEEE Secretary, with assistance from Corporate Governance staff, to strive to ensure that the proposed amendment’s is compliant and that its wording is clear, unambiguous, grammatically and stylistically correct, and pertinent to the subject matter of IEEE governance documents.

When following the foregoing cooperative process the wording of the proposed petition or a Constitutional Amendment is (i) determined to be compliant by IEEE Legal Counsel, reviewed by the IEEE Secretary, and approved by the IEEE Tellers Committee, it shall be considered the official petition language, or (ii) determined not compliant by IEEE Legal Counsel because it conflicts with the IEEE governing documents or other regulatory authority applicable to IEEE, then the proposed petition for Constitutional Amendment shall be rejected.

IEEE Corporate Governance staff shall advise those intending to propose an amendment to the IEEE Constitution by petition of the relevant campaigning guidelines approved by the IEEE Board of Directors. All individuals who are circulating a petition or who are successful in their petition shall follow the campaigning guidelines. Petitioners are bound by the principles and relevant provisions of IEEE's campaigning policies.

Petition qualifications and procedures for announcement, distribution, and approval of petitions shall be specified in the IEEE Policies.