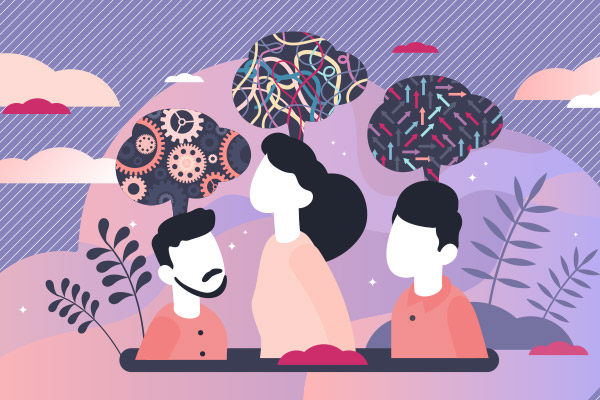 "Implicit bias, often referred to as unconscious bias, occurs when we make judgments or decisions on the basis of thought patterns that subconsciously and unintentionally affect outcomes.

"It is ironic and unfortunate that the allowance of factors not based on pure facts or merit are the inevitable byproducts of the efficiency of human cognition—while most of us believe that we are more fair and less prejudiced than the average or typical person, research has shown that all humans demonstrate bias in some capacity1,2." Andrea Goldsmith, Chair, 2021 Ad Hoc Committee on Diversity and Inclusion.

There is a substantial amount of literature on implicit bias in STEM. Notably, the US White House Office of Science and Technology Policy has developed a concise summary (PDF, 3 MB) on implicit bias, as it is such a notable issue. It is undeniable that implicit bias, while disproportionately impacting women and other underrepresented groups in STEM, impacts everyone.

We don't want to manifest any form of bias, but the reality is that we, as humans, are incapable of either accessing or modifying our own subconscious cognitive processes. We can nevertheless achieve more fairness and improve the quality of our decision making if we make a commitment to recognizing any stereotypes that we may implicitly harbor.

The very act of realizing that we all harbor implicit biases can enable us to mentally monitor and attempt to ameliorate any hidden and unwanted perspectives toward others prior to expressing those opinions in our decision-making processes. Once we make ourselves aware of the fact that we all maintain implicit biases, we can take the time to make a concerted effort to reconsider and, as needed, adjust our judgments and decisions.

The IEEE Awards Board and Program

Since 1917, the IEEE Awards Program has paid tribute to technical professionals whose exceptional achievements and outstanding contributions have made a lasting impact on technology, society, the engineering profession, and humanity.

Similarly, the IEEE Awards Board, which administers the awards and recognition program of IEEE, serves to advance the interest of its members by recognizing their contributions in advancing fields of interest to IEEE and to the benefit of society.

To better ensure that all stakeholders are served through the IEEE Awards Program, the Board is committed to working to ensure that outstanding contributions in STEM fields are equitably recognized without regard to gender, ethnicity, religion, or technical specialization.

Over the past three years, IEEE has seen an increase in the percentage of women nominated for and receiving technical awards under the auspices of the organization.

Additionally, IEEE was proud to award the 2015 Medal of Honor, the organization’s most prominent medal, to Mildred S. Dresselhaus for leadership and contributions across many fields of science and engineering.